Celebrating the Class of 2019

As the weather gets colder and the leaves start to turn, the Stuyvesant High School Alumni Association wishes good luck to all its alumni who go back to college or graduate school–especially to the 793 new alumni who joined its ranks in June.

The class of 2019 held commencement exercises at Carnegie Hall on Wednesday, June 26, in a service noted for some remarkable contributions from members of the Stuyvesant community.

The emphasis for the day was on family and community. All the guest speakers made this a central theme of their speeches, including keynote speaker the Hon. Denny Chin ’71; the student-selected faculty speaker, Jim Cocoros, of the Math Department; and Alumni Association Board President Soo Kim ’93. All told the graduates how easy it is to ignore one’s family and community, or take them for granted while focusing instead on school, work, or other goals. All encouraged graduates to take the time on their graduation days to remember their families, and to remember the Stuyvesant family in the years to come.

Judge Chin, a justice of the United States Second Circuit Court of Appeals, detailed his family’s journey to the U.S. His grandfather entered the U.S. in 1916 and returned to his hometown in China only twice more. When he became a U.S. citizen in 1947, he was able to bring over his family, including Denny.

Chin described the sacrifices his grandparents and parents made so he and his siblings, including brothers Daly Chin ’73 and David Chin ’74, could access an education that was not possible for them in Hong Kong. Judge Chin’s son, Paul Chin ’02, also went to Stuyvesant.

He ended his speech with the following advice:

“As you move on, don’t forget about your parents and grandparents and others before them, and the paths they had to travel for you to get to this point in your lives. There is much that you can learn from them.

Remain balanced, and keep in perspective what is important in life. You will find that it is too easy to get so caught up in work or studies that you ignore your families, your friends and even yourselves. Do not let that happen.

Remember also the importance of giving back. There are many members of our society who are less fortunate than we are, and there are so many things in this world that still need fixing.

And finally, remember how lucky and fortunate you are to be graduating from this very special and wonderful school.”

As you move on, don't forget about your parents and grandparents and others before them, and the paths they had to travel for you to get to this point in your lives.

Jim Cocoros, who teaches math at Stuyvesant and helps coach the Math Team, was the student-selected faculty speaker for this year’s graduation ceremony. He gave a touching speech on the importance of family and of setting priorities, centering mostly around his own experience of his father’s illness and death earlier this year.

Please scroll down to see a small gallery of photographs from the 2019 Commencement Ceremony, courtesy of Island Photography.

You can support scholarships with a donation of $1,000 or more here.

'Remember the importance of giving back.' -Hon. Denny Chin '71 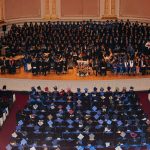 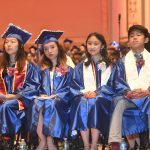 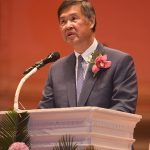 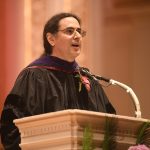 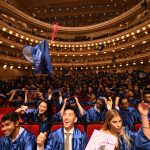 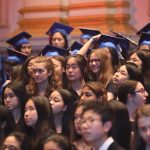 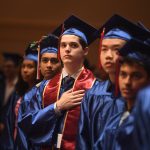 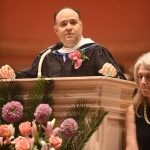 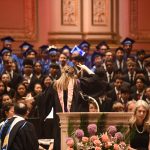 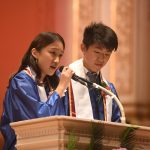 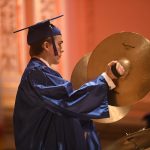