On May 30, 2019, the Stuyvesant High School Alumni Association (SHSAA) hosted the inaugural Benefit for Stuyvesant at The Water Club along the East River. This gala has been many years in the making and will establish an annual tradition that allows us to come together and celebrate the most distinguished and impactful members of our community.

Because the event was an occasion to celebrate Stuyvesant and the impact the school has had across multiple generations of students, organizers put a concerted effort into finding speakers and honorees that spanned decades of the school’s history.

The main prize, the Golden Pegleg, is awarded in three different categories. The first is “Outstanding Achievement” for a graduate who has achieved notable success or changed their chosen field in a remarkable way. This award will be granted each year to one Stuyvesant graduate. The other two categories are for “Outstanding Contribution by a Faculty Member” for a teacher or administrator who has made a meaningful impact on students, and “Outstanding Young Alum” award for a graduate from within the last ten years whose achievements stand out from their peers. For our inaugural gala, two young alumnae were selected.

Below were our four honorees for the 2019 Benefit for Stuyvesant: 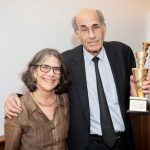 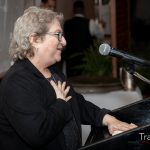 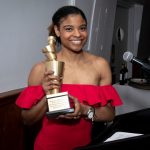 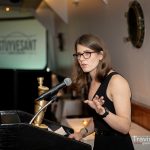 Benefit Chair Lillian Seu, PhD ’01 noticed that a common thread of many of the honorees’ speeches was, “If you can make it at Stuyvesant, then you can make it anywhere. It really hammered home the point that the formative years you spend at Stuy set you up for all that your future brings.”

Each honoree discussed the way Stuyvesant had impacted their lives and helped set them on their life’s trajectory. Dr. Axel reminisced on his time in Stuyvesant’s science classes, then recounted that at Johns Hopkins University School of Medicine, he was told by two professors and administrators to stick to research rather than become a practitioner. Ms. Sheinman told a story about a friend of hers who was dying of AIDS in the early 1990s, and how the Speech & Debate team came together to raise money in the AIDS Walk that year as a way of supporting her. Ms. Prescod discussed the challenges of trying to keep up with Stuyvesant as she competed in fencing matches around the world during her high school years. Ms. Whitmore said Stuyvesant instilled in her an uncompromising spirit of high quality which permeated her experiences in college and in her career.

To recognize outstanding members of our community, the Association wanted to create an award that would be a unique piece of memorabilia for recipients. SHSAA Board Member Ling Wu Kong, JD ’01 worked with Chris Suter from the Stuyvesant Technology Department and Stuyvesant senior, Raunak Chowdhury ’19, to hold a design competition among Stuyvesant students for the best design of a Golden Pegleg.

The winning design was submitted by Bill Ni ’19, who created a deconstructed pegleg. “I found the dimensions of the trophy particularly constraining, so I had to think outside of the box for a cool design that would represent Stuyvesant and be a notable item of collection for those that earned it,” Ni said. He started with a pyramid shape similar to the American Music Awards trophy and then changed it to a cone to make it look more like a pegleg. “But I found that grotesque given the platform it was mounted on,” Ni said, “so I added more cones on top and cut out some sections so that the final design would be more eye-catching.”

Mr. Suter then supervised the printing of the design on 3D printers in the Irwin Zahn Innovation Lab, which opened in 2018 thanks to support from Irwin Zahn ’44 and the Moxie Foundation. The award was then carefully spray-painted gold by SHSAA employees and mounted onto a marble base. The Golden Pegleg Award, from its design to manufacturing, was 100% made at Stuyvesant.

The brightest spot of the evening was the fundraising success with over $130,000 raised. “Those funds will go towards the most urgent needs at Stuyvesant,” said Laura Silvius, Executive Director of the Alumni Association. “Allocations for clubs and classes, StuyPrep, Alumni Mentoring, all these and more will be funded by the money raised here tonight.” 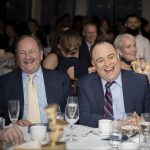 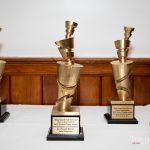 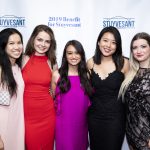 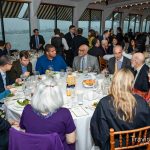 To view more photos from the 2019 Benefit for Stuyvesant, click here.

To learn more about our upcoming 2020 Benefit for Stuyvesant, visit this page.

You can give in honor of this year's Benefit!Donate today