The COVID-19 pandemic has directly impacted all Americans, uniting so many of us in loss and reinforcing the need for human connection to adapt and stay safe. Conversely, the pandemic has also divided American communities, particularly against the Asian American and Pacific Islander (AAPI) community, who have been blamed for the pandemic and made the target of hate and violence. Stop AAPI Hate has documented more than 3,000 counts of anti-Asian hate crimes since March 2020, a direct result of racism fueled by misinformation and fear during a global pandemic.

Stuyvesant High School and the Stuyvesant Alumni Association are proud to co-host this virtual community discussion to talk about racism against AAPI, an issue that so profoundly affects our community.

This event will provide an opportunity for Stuyvesant alumni and current Stuyvesant students to share their experiences, opinions and questions on recent acts of racism and violence against the AAPI community, how racism and bias manifest, and how positive change can start within our own community.

Chris Kwok ‘92 of the Asian American Bar Association (AABANY) will be the moderator and will co-present a report on the subject with AABANY Executive Director Yang Chen ‘83. U.S. Congresswoman Grace Meng ‘93 will discuss anti-hate crime legislation, and resources for education and awareness. Joanne Kwong ‘93, President of Chinatown’s iconic Pearl River Mart, will discuss impacts to small businesses and growing activism within the community. Principal Seung Yu and SHSAA President Soo Kim ‘93 will give opening remarks.

This event will be held on Thursday, April 15 at 6:30pm ET. The Zoom link will be shared after registering.

Scroll down for bios of the panelists and moderator.

This event is free for all. However, registration does not guarantee entry. There are a limited number of spots to view this event, and admittance is on a first come, first serve basis. If you are unable to attend, we will be sharing a recording on our video archive next week.

Please note: You MUST log into MyStuy to reserve a ticket. One ticket per alumnus/a.

Register for the discussion

Yang Chen ’83 is the Executive Director of the Asian American Bar Association of New York (AABANY), a position he has held since August 2009. Mr. Chen is AABANY’s first Executive Director. He has been active in AABANY for many years, having served on the Board and numerous committees, including the Judicial Affairs (now Judiciary) Committee, of which he was a chair. Mr. Chen served as AABANY’s President in 2008. Before becoming AABANY’s Executive Director, Mr. Chen was a partner in the firm of Constantine Cannon, a law firm specializing in antitrust and complex commercial litigation. He was among the group that founded the firm in 1994, which started as Constantine & Associates. Before joining Constantine Cannon, Mr. Chen was an associate in the New York office of McDermott, Will & Emery and before that he was associated with Breed, Abbott & Morgan (now Winston & Strawn). Mr. Chen is admitted to practice in the State of New York, the United States District Court, Southern and Eastern Districts of New York, the Second Circuit Court of Appeals and the Supreme Court of the United States. He is a graduate of the New York University School of Law and Binghamton University.

Chris Kwok ’92 is an attorney and community organizer who has been active in speaking about anti-Asian violence and harassment, currently serving as Board Director for the AABANY (Asian American Bar Association of New York) and Chair of its Issues Committee.

Some of the programs Kwok has participated in include: a panel sponsored by the National Asian Pacific American Bar Association (NAPABA) on the history of using public health concerns to justify anti-Asian sentiments; a panel for the Asian American Arts Alliance where he discussed the rise in COVID-19 hate crimes and the role of Asian American artists in retelling the lost narratives of the APIA community; and a panel for the Thomson Reuters Asian Affinity Network about the need to build consciousness and address anti-Asian sentiments in discussions about diversity and inclusion. He is the co-Executive Editor of a report authored by AABANY and Paul Weiss: A Rising Tide of Hate and Violence against Asian Americans in New York During COVID-19: Impact, Causes, Solutions.

Kwok majored in Government and minored in Asian American studies at Cornell University. He earned his J.D. from UCLA Law School, where he focused on Critical Race Studies and was an Editor of the Asian American Pacific Islander Law Journal.

Grace Meng ’93 represents New York’s 6th Congressional District located in Queens, New York. She was born and raised in Queens as the daughter of immigrants and has never forgotten where she came from or who she fights for.

As a child growing up in the most diverse county in America, Grace quickly came to believe that every person deserves a seat at the table. Whether young or old, rich or poor, she believes every voice deserves to be heard. That conviction prompted Grace to begin her professional career as a public interest lawyer before serving two terms in the New York State Assembly.

Now, in her third term in Congress, Grace continues to advocate for inclusive policies that benefit the vulnerable and the often overlooked. From her seat on the House Appropriations Committee, and as the mother of two young boys – Tyler and Brandon – she regularly fights for federal programs that benefit women and children. She even co-founded the Bipartisan Congressional Kids’ Safety Caucus which she still co-chairs.

While Grace remains one of the 15 youngest Democrats in Congress, she has been ranked the 8th most-effective legislator in the Democratic Party according to the Center for Effective Lawmaking. She serves as Chair of ASPIRE PAC through which she supports Asian American candidates across the country, and works to ensure that Asian American voices and concerns are heard in the political process.

Grace represents the only congressional district located entirely in Queens, New York, where she continues to live with her husband, Dr. Wayne Kye, a professor at New York University’s College of Dentistry, and her two boys. She attended New York City public schools, including Stuyvesant High School, received her undergraduate degree from the University of Michigan, and earned her law degree from Yeshiva University’s Benjamin N. Cardozo School of Law.

Joanne Kwong ’93 is the president of Pearl River Mart, the iconic NYC Asian emporium established in 1971.

After witnessing the public lament that followed the 2016 closing of the historic “friendship store,” she joined her in-laws, the original owners, and reinvented the brand, establishing four new Manhattan locations in Tribeca/Chinatown, Chelsea Market, and the Museum of Chinese in America. A second food-focused store at Chelsea Market, Pearl River Mart Foods, opened during the pandemic in October 2020.

Today, under Joanne’s leadership, Pearl River remains the joyful shopping experience beloved by generations of New Yorkers and visitors. It now also serves as a dynamic hub for the Asian American community: hosting events, generating digital content, and serving as a platform for Asian American entrepreneurs, designers and artists. Pearl River’s community-based approach to commerce has been recognized by The Wall Street Journal as “the future of retail,” and by New York Magazine as one of its “Reasons to Love NY.”

Joanne is a product of the NYC public schools, and holds degrees from Columbia University, Duke Law School and Duke Graduate School. Before leading Pearl River, she had a long and varied career as a civil litigator, federal judicial clerk, adjunct law professor, strategic counsel, and non-profit communications executive. Joanne lives on the Upper West Side with her husband and two young sons and is active in a number of NYC-based organizations, including the Mayor’s Small Business Advisory Council and the Columbia College Alumni Association.

Seung Yu is the principal for Stuyvesant High School. Prior to his current role, Seung served as the Senior Executive Director, Office of Postsecondary Readiness, in the New York City Department of Education. His portfolio included Career and Technical Education, College and Career Planning, and Computer Science Education which support NYC public schools in strengthening the postsecondary preparation and outcomes of more than 325,000 high school-aged students each year. He oversaw two citywide initiatives: College Access for All, which has resulted in record-high postsecondary enrollment in NYC for the Class of 2018 (62%) and 2017 (59%), and Computer Science for All, which has delivered CS education to over 160,000 students and trained over 1,900 teachers. Under CS4All, 5,190 NYC students (higher percentages of female, black and Latinx) took an AP CS exam in 2018. Seung was also the founding principal of the Academy for Software Engineering – a top CTE school and the city’s flagship computer science high school. Prior to NYC, Seung was the Executive Director of the State Education Agency K-12 Service-Learning Network in Washington, D.C., where he led the federal advocacy of K-12 school-based service-learning. Seung is currently working towards an Ed.D in Educational Leadership, Administration and Policy at Fordham University.

Many thanks to Ms. Dina Ingram, Stuyvesant’s Director of Family Engagement, and Mr. Angel Colon for coordinating with the Alumni Association staff and the Membership, Reunions & Events Committee to put together this event.

If you have any questions, reach out to [email protected]. The Stuyvesant High School Alumni Association office is currently unable to take phone calls to our main line. Please email us to schedule a phone call. 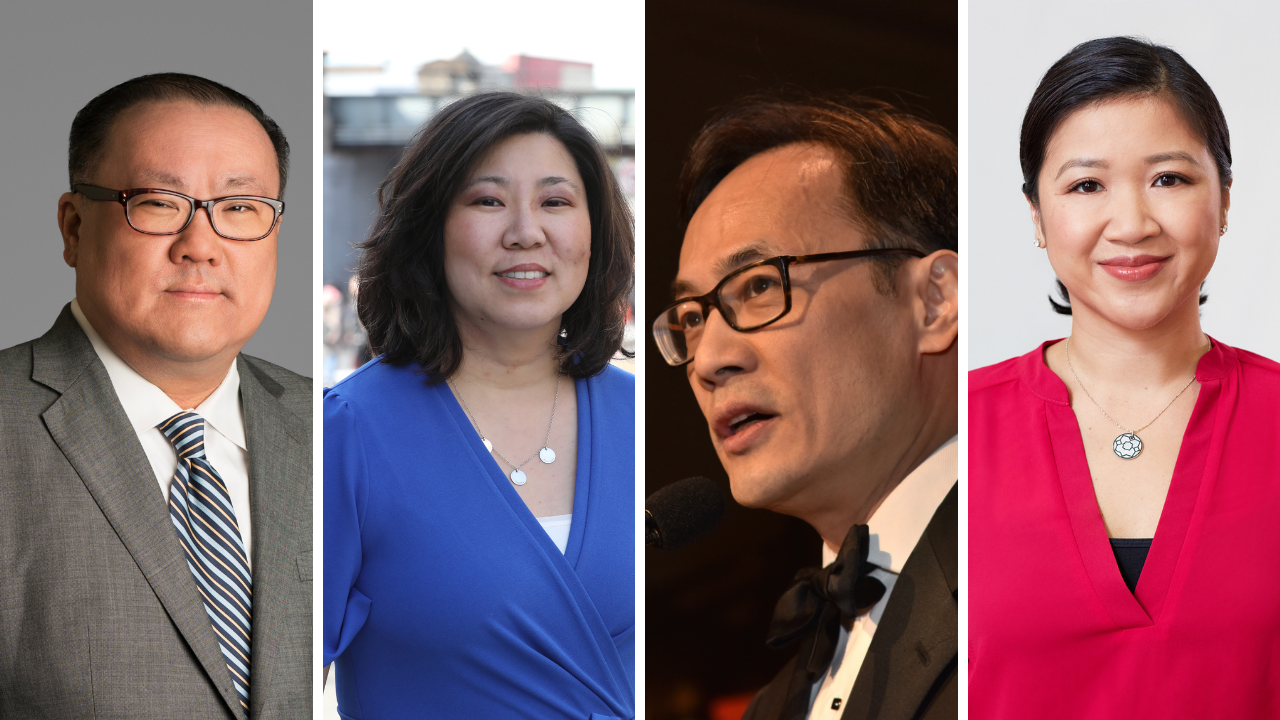